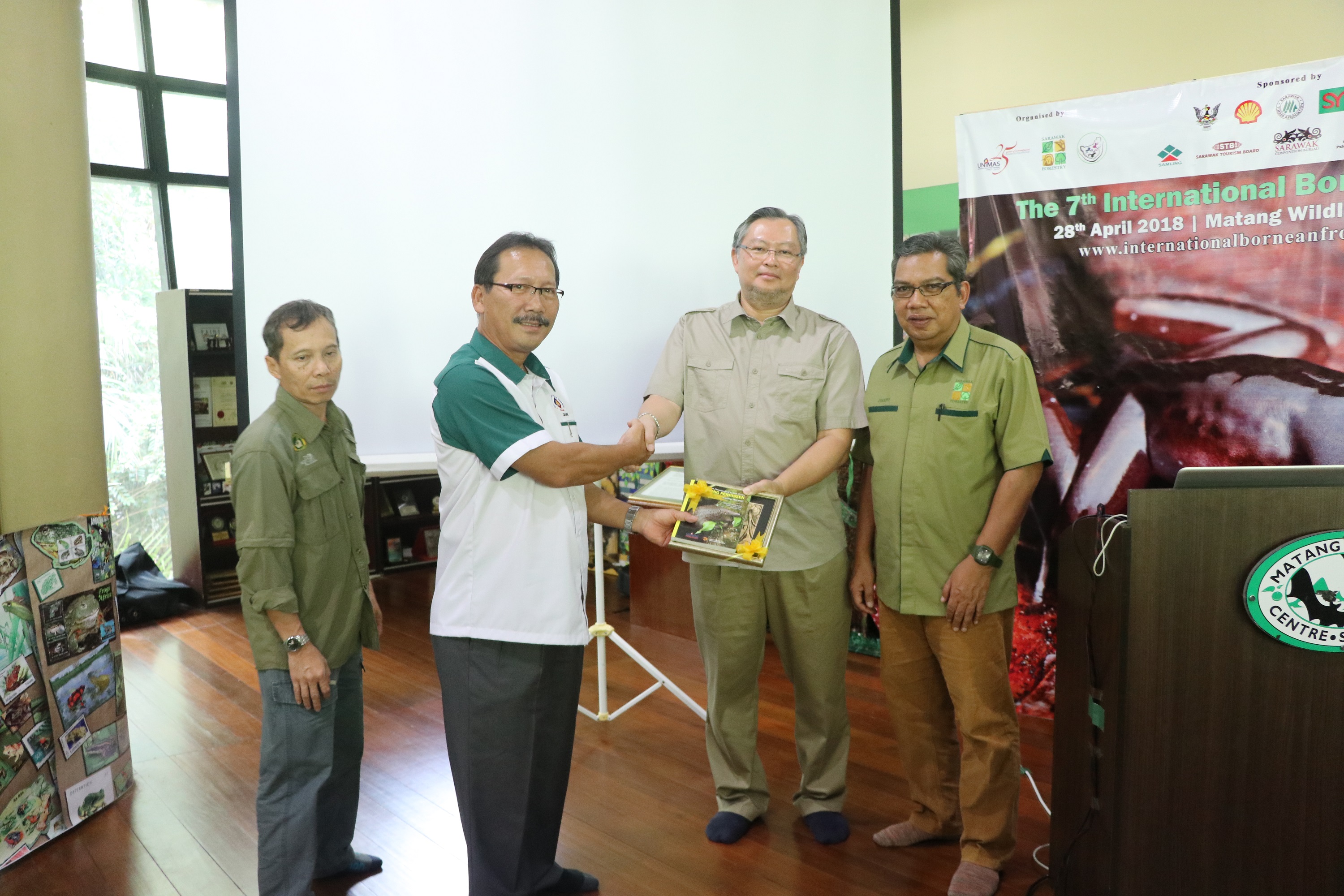 Posted at h in News by hema

The Race was celebrated every year, on the last weekend of April, since 2012, and this was the seventh edition. The event coincides with the annual ‘Save the Frogs Day’, a global event celebrated via 270 events in over 30 countries worldwide, to highlight conservation issues facing the world’s amphibians. The Race was organised by the students and staff of the Institute of Biodiversity and Environmental Conservation (IBEC), the Faculty of Resource Science and Technology, and the Faculty of Creative and Applied Arts of UNIMAS and SFC.

The highlight of the event was the International Bornean Frog Race, that started after lunch, and continued till midnight. Limited to 100 participants to reduce the impact on the vegetation and fauna, the event received an overwhelming response, with participants from all parts of Malaysia, 13 additional countries from four continents. The Matang Wildlife Centre is an appropriate venue for the event, as the Matang Range being home to over 70 species of amphibians.

All activities were held at the Matang Wildlife Centre, and included, an exhibition of amphibian memorabilia and books, a live auction, sale of food and drinks, documentary screening and near the end of the day, a photographic race along a pre-designated trail within the Centre, where participants attempt to compete with each other to obtain photographs of the most number of species (within a two-hour time period), as well as those that was to be judged for their aesthetics, etc, in three different camera categories (DSLR, compact and mobile phone). Every Race participant received a generous goodie-bag, containing a T-shirt, a button badge, a bookmark, a field guide to the amphibians of the Centre and other items specifically made for the event every year. The event was flagged-off by Mr. Oswald Braken Tissen of Sarawak Forestry Corporation and Prof. Dr. Gabriel Tonga Noweg, Director of the Institute of Biodiversity and Environmental Conservation, UNIMAS.

The International Speaker for the event was Dr. Arvin Diesmos of the Natural History Museum of the Philippines, who spoke on the biodiversity and conservation challenges of the amphibians of the Philippines. The Malaysian speaker, Mr. Kueh Boon Hee of Universiti Malaysia Sabah, addressed the question of why amphibians matter to humans. Four specialised workshops were held, one each on advanced photography using DSLR and mobile phones, recording and appreciating frog calls, and drawing and painting workshops. Other resource persons included Mr. Chien Lee, noted Kuching-based photographer, who spoke on photographing the frogs of Ecuador and Colombia; and Universiti Sains Malaysia student, Ms. Pearl Ee, who showed that phone photography too can be fun and match other camera formats. Prof. Ulmar Grafe from Universiti Brunei Darussalam conducted the frog call workshops, giving participants the opportunity to visualise amphibian calls on tablets and hearing the variety of calls made by our local frogs. Finally, the frog art workshop, conducted by Assoc. Prof. Zulkalnain Abidin, Mr. Sylvester Wielding Jussem and Mr. Mohamad Faizuan Mat was both an introduction to wildlife art and a demonstration of live art, whereby participants got to see a masterpiece being created right in front of their eyes. Dr. Hans Hazebroek, geologist, naturalist, author and photographer, served as the main judge to the photographic part of the Race.

The International Bornean Frog Race is copyright protected by the Institute of Biodiversity and Environmental Conservation, UNIMAS and held annually with a partnering organisation, initially, with the Camp Permai Resort, and in the next sixth edition, with the Sarawak Forestry Corporation. It brings to the fore the great beauty and diversity of Borneo’s amphibian fauna, and at the same time, highlighting the importance of forests and wetlands for maintaining biodiversity.